The Sherman & Ruth Weiss Community Library is a community meeting place where people of all ages may enrich their lives through educational and leisure activities. The library provides both print and non print materials and the technology essential to personal growth and development, as funding allows. The library serves as an access point for reliable information and offers its services for free or at reasonable cost.

“We hope you may live long to gladden the seekers after knowledge, by furnishing buildings to house books that all may read for recreation and the educating of the people.” — Letter of thanks from the Hayward Library Board to Andrew Carnegie, 1904.

Hayward’s first informal library was established by Norwegian immigrants. They held a collection of books on American themes and classics, all in Norwegian language.  The library was located in Clapperton Hall over the Drug Store.

The Hayward Free Library was founded in 1887 on the second floor of what is now the Hayward Bakery. In 1904 funds from Andrew Carnegie and a commitment from the townspeople of Hayward built the handsome Carnegie Library at the corner of Main and Highway 63.

The Hayward Carnegie Library advertised that it contained 3,000 volumes and a reading room with 14 different newspapers and periodicals. It was a proud first step to making Hayward more than a rough and tumble logging town.

Surprisingly, it took more than a century later, for the library to become taxed beyond its intended use. We lacked space for computers, programs and other services our community deserved. We had eight parking spaces that were almost always full. Senior citizens and customers with physical challenges were unable to use the stairs to reach the main floor.

After several years of research and community dialogue, the Hayward Library Board of Trustees announced plans to build a new library. Their goal was to provide a progressive, comfortable and accessible building for the community and its visitors.

In 1999 the Library Board of Trustees formed an Exploratory Committee to determine if the library could expand the Carnegie building or if it must move. Concurrently, the Board hired Bill Turner and Erik Hansen, then of Stubenrauch Architects, to assess the building and project library needs to the year 2020. Based on a year of study, deliberation and reports from Stubenrauch, the Exploratory Committee recommended that the library move to a new location.

The Library Board eventually found and purchased a beautiful site within city limits for the new library. Enhanced by a natural wooded setting and pond, the new property is located on Highway 77 next to Complete Computer Solutions and across from the Hayward Wesleyan Church.

In late summer of 2001, the Steering Committee, created from [a wide range of community representatives,] began to fundraise for the new building. Unfortunately for all, the 9-11 tragedy soon hit. The public’s attention understandably became focused on giving to those affected by the event.

The tragedy did [contribute] to a slow start for the building campaign. But the dedicated Library Board, staff, Steering Committee, Friends of the Library and other volunteers persevered. They worked prodigiously for approximately six years on silent auctions, ski and snowshoe events, bike tours, concerts, potlucks, casino nights and more. School children, private citizens, local businesses and organizations, and corporations began to contribute.

The Library Board chose Short, Elliott & Hendrickson (S E H) to design the building and contracted with Church Street, a professional fundraising company. Soon after, the Board chose Market & Johnson as the construction company.

Eventually enough funds were raised to apply for the matching Community Development Block Grant. With help from Northwest Regional Planning in Spooner and the City of Hayward, the State Department of Commerce awarded the grant to the library. Next Sawyer County agreed to purchase a portion of the library’s new land with the understanding that the library had 10 years to buy it back.

The library held its groundbreaking ceremony in June 2006. That autumn, Market and Johnson began construction. Sawyer County loaned a major asset in the form of its Facility Manager Dennis Erickson. Throughout the construction process, Dennis served as liaison between the Library Board, director and construction crew.

The library was move-in ready by May 2007. Staff, spouses, friends, community service workers and more than 50 additional volunteers assisted AJ Movers of Superior to complete the move. The library’s Grand Opening ceremony was held Saturday June 2, 2007.

Since then, the library welcomes an average of 2,000 plus visitors weekly from 29 communities and beyond. Our 11 internet stations, two study rooms, community meeting room and nature park trail and pond provide an inviting place for scholarly and recreational pursuits. Visitors and staff often are treated to the sight of deer grazing down by the pond.

Although words seem insufficient for such a monumental achievement, a heartfelt thank you goes to all the people, businesses and organizations that helped to build our community’s beautiful new library. Please stop by to enjoy your accomplishment! 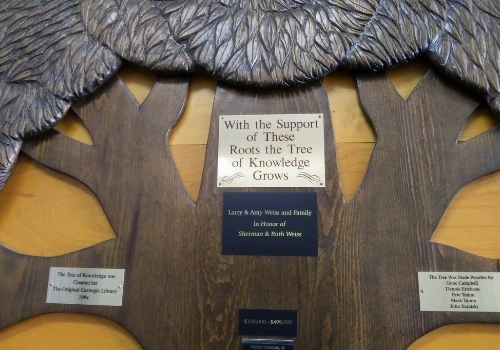 This plaque on the Library’s Tree of Knowledge acknowledges the gift from Larry and Amy Weiss in honor of Larry’s parents Sherman and Ruth Weiss.

Their major gift, along with hundreds of other donations, enabled the Library Board of Trustees to start building our library in 2006. 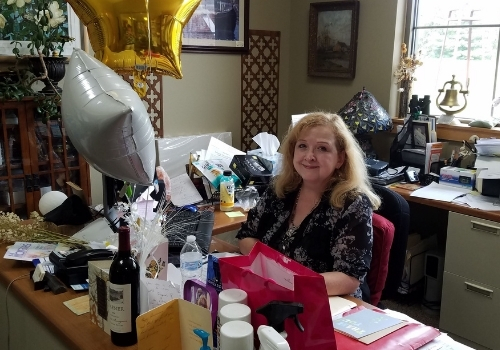 In June 2020, Molly Lank-Jones enjoyed her 25-year anniversary as library director, despite that it was smack in the middle of the year of COVID-19. 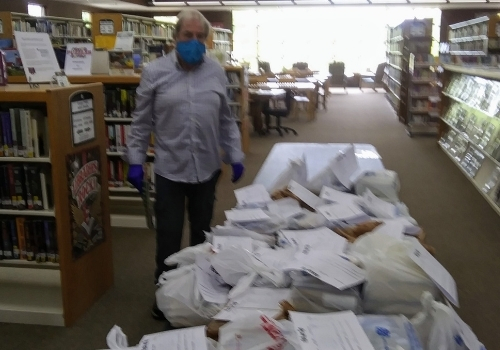 Library Clerk Ron Bieber readies the table of library materials for Curbside Pickup in the midst of COVID-19. 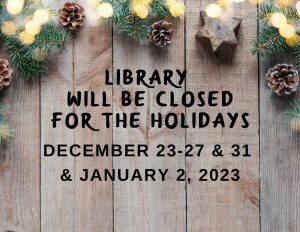 The library is closed for the following holidays: